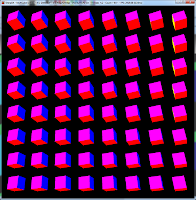 Multi-threading is an important feature added to Direct3D11 two years ago and has been increasingly used on recent game engine in order to achieve better performance on PC. You can have a look at "DirectX 11 Rendering in Battlefield 3" from Johan Anderson/DICE which gives a great insight about how it was effectively used in practice in their game engine. Usage of the Direct3D11 multithreading API is pretty straightforward, and while we are also using it successfully at our work in our R&D 3D Engine, I didn't take the time to sit down with this feature and check how to get the best of it.

I recently came across a question on the gamedev forum about "[DX11] Command Lists on a Single Threaded Renderer": If command lists are an efficient way to store replayable drawing commands, would it be efficient to use them even in a single threaded scenario where lots of drawing commands are repeatable?

In order to verify this, among other things, I did a simple micro-benchmark using C#/SharpDX, but while the results are somehow expectable, there are a couple of gotchas that deserve a more in-depth look...

There is already a nice "Introduction to Multithreading in Direct3D11" on msdn that is worth reading if you are already a little bit familiar with the Direct3D11 API.

In Direct3D10, we had only a class ID3D10Device to perform object/resource creation and draw calls, the API was not thread safe, but It was possible to emulate some kind of deferred rendering by using mutexes and a simplified command buffers to access safely the device.

In Direct3D11, preparation of the draw calls are now "parralelizable" while object/resource creation is thread safe. The API is now split between:

In order to use deferred rendering, we need to create new ID3D11DeviceContext called deferred context. One context for each thread responsible for preparing a set of draw calls.

Then the sequence of multithreaded draw calls are executed like this: 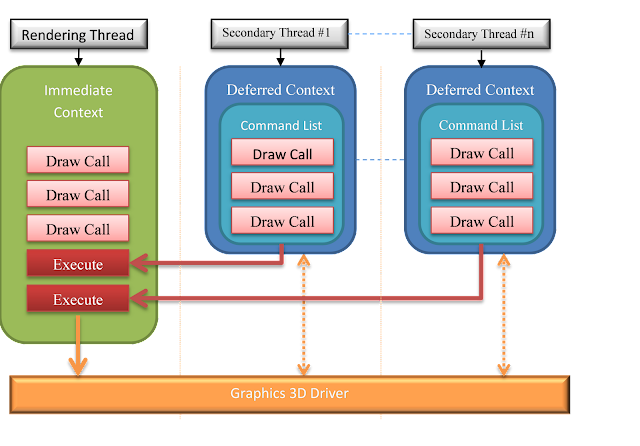 Each secondary threads are responsible to prepare draw calls in a set of ID3D11CommandList that will effectively be executed by the immediate context (in order to push them to the driver).

The simplified version of the code to write is fairly easy:


The API provides several key advantages:
About the "native support from driver", It can be checked by using CheckFeatureSupport (or directly in SharpDX using CheckThreadingSupport) but it seems that almost only NVIDIA (and quite recently, around this year), is supporting this feature natively. On my previous ATI 6850 and now on my 6900M are not supporting it. Is this bad? We will see that the default Direct3D11 runtime is performing just fine for this, but doesn't provide any extra boost.

We will also see that there is an interesting issue with the usage of Map/Unmap or UpdateSubresource in order to update constant buffers, and their respective usage under a multithreading scenario could hurt performances.


In order to stress-test multi-threading using Direct3D11, I have developed a simple application called MultiCube (available as part of SharpDX samples: See Program.cs)


This application is performing the following benchmark: It renders n x n cubes on the screen, each cube has its own matrix rotation. You can modify the number of cubes from 1 (1x1) to 65536 (256x256). The title bar is including some benchmark measurement (FPS/ time per frame) and you can change the behavior of the application with following keys:
When the deffered mode is selected, each threads are rendering a set of rows in batch. If you have for example 100x100 cubes to render, and 5 threads, each thread will draw 20x100 cubes.

If your graphics driver doesn't support  natively multithreading, you will see a "*" just after Deferred node.

You can download the application here. It is a single exe that doesn't need anykind of install (apart the DirectX June 2010 runtime). Also, being able to pack this application into a single exe is a unique feature of SharpDX: static linking of a .NET exe with SharpDX Dlls.


If we examine the results a little more carefully, there are a couple of interesting things to highlight:

Of course, as usual, this is a synthetic, micro-benchmark test that should be taken with caution and can not reflect every test cases, so you need to perform your own benchmark if you have to make the decision of using multithreading rendering!

Finally, to respond to the original gamedev question, I provided a "Frozen Deferred" test in MultiCube to test if rendering a pre-prepared CommandList is actually faster then executing it with an immediate context: It seems that It doesn't make currently any differences (but for this to be sure, I would have to run this benchmark on several different machines/CPU/graphics card/drivers configs in order to fully verify it).