August 12, 2010 Tools, demoscene edit
Not so much post here for a while... So I'm going to just recap some of the coding work I have done so far... you will notice that It's going in lots of direction, depending on opportunities, ideas, sometimes not related to democoding at all... not really ideal when you want to release something! ;)

So, here are some directions I have been working so far...

I tried to work more with C#, XNA... looking for an opportunity to code a demo in C#... I even started a post about it few months ago, but leaving it in a draft state. XNA is really great, but I had some bad experience with it... I was able to use it without requiring a full install but while playing with model loading, I had a weird bug called the black model bug. Anyway, I might come back to C# for DirectX stuff... SlimDx is for example really helpful for that.

I have coded a synth dedicated to 4k/64k coding. Although, right now, I only have the VST and GUI fully working under Renoise.. but not yet the asm 4k player! ;) 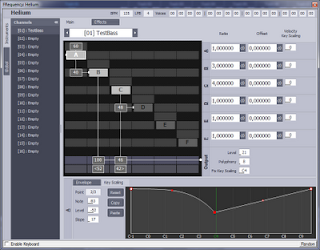 The main idea was to build a FM8/DX7 like synth, with exactly the same output quality (excluding some fancy stuff like the arpegiator...). The synth was developed in C# using vstnet, but must be more considered as a prototype under this language... because the asm code generated by the JIT is not really good when it comes to floating point calculation... anyway, It was really good to develop under this platform, being able to prototype the whole thing in few days (and of course, much more days to add rich GUI interaction!).

I still have to add a sound library file manager and the importer for DX7 patch..... Yes, you have read it... my main concern is to provide as much as possible a tons of ready-to-use patches for ulrick (our musician at FRequency)... Decoding the DX7 patch is well known around the net... but the more complex part was to make it decode like the FM8 does... and that was tricky... Right now, every transform functions are in an excel spreadsheet, but I have to code it in C# now!

You may wonder why developing the synth in C# if the main target is to code the player in x86 asm? Well, for practical reasons : I needed to quickly experiment the versatility of the sounds of this synth and I'm much more familiar with .NET winform to easily build some complex GUI. Although, I have done the whole synth with 4k limitation in mind... especially about data representation and complexity of the player routine.

For example, for the 4k mode of this synth, waveforms are strictly restricted to only one : sin! No noise, no sawtooth, no square... what? A synth without those waveform?.... but yeah.... When I looked back at DX7 synth implem, I realized that they were using only a pure "sin"... but with the complex FM routing mechanism + the feedback on the operators, the DX7 is able to produce a large variety of sounds ranging from strings, bells, bass... to drumkits, and so on...

I did also a couple of effects, mainly a versatile variable delay line to implement Chorus/Flanger/Reverb.

So basically, I should end up with a synth with two modes :
- 4k mode : only 6 oscillators per instrument, only sin oscillators, simple ADSR envelope, full FM8 like routing for operators, fixed key scaling/velocity scaling/envelope scaling. Effects per instrument/global with a minimum delay line + optional filters. and last but not least, polyphony : that's probably the thing I miss the most in 4k synth nowadays...
- 64k mode : up to 8 oscillators per instrument, all FM8 oscillators+filters+WaveShaping+RingModulation operators, 64 steps FM8's like envelope, dynamic key scaling/velocity scaling/envelope scaling. More effects, with better quality, 2 effect //+serial line per instrument. Additional effects channel to route instrument to the same effects chain. Modulation matrix.

The 4k mode is in fact restricting the use of the 64k mode, more at the GUI level. I'm currently targeting only the 4k mode, while designing the synth to make it ready to support 64k mode features.

What's next? Well, finish the C# part (file manager and dx7 import) and starting the x86 asm player... I just hope to be under 700 compressed byte for the 4k player (while the 64k mode will be written in C++, with an easier limitation around 5Ko of compressed code) .... but hey, until It's not coded... It's pure speculation!.... And as you can see, the journey is far from finished! ;)

During this summer, I came back to my compression experiment I did last year... The current status is quite pending... The compressor is quite good, sometimes better than crinkler for 4k... but the prototype of the decompressor (not working, not tested....) is taking more than 100 byte than crinkler... So in the end, I know that I would be off more than 30 to 100 byte compared to crinkler... and this is not motivating me to finish the decompressor and to get it really running.

The basic idea was to take the standard context modeling approach from Matt Mahoney (also known as PAQ compression, Matt did a fantastic job with his research, open source compressor....by the way), using dynamic neural network with an order of 8 (8 byte context history), with the same mask selection approach than crinkler + some new context filtering at the bit level... In the end, the decompressor is using the FPU to decode the whole thing... as it needs ln2() and pow2() functions... So during the summer, I though using another logistic activation function to get rid of the FPU : the standard sigmoid used in the neural network with a base 2 is 1/(1+2^-x)), so I found something similar with y = (x / (1 + |x|) + 1) /2 from David Elliot (some references here). I didn't have any computer at this time to test it, so I spent few days to put some math optimization on it, while calculating the logit function (the inverse of this logistic function).

I came back to home very excited to test this method... but I was really disappointed... the function had a very bad impact on compression ratio by a factor of 20%, in the end, completely useless!

If by next year, I'm not able to release anything from this.... I will put all this work open source, at least for educational purposes... someone will certainly be clever than me on this and tweak the code size down!

Recall that for the ergon intro, I have been working with a very thin layer around DirectX to wrap enums/interfaces/structures/functions. I did that around D3D10, a bit of D3D11, and a bit of D3D9 (which was the one I used for ergon). The goal was to achieve a DirectX C# like interface in C++. While the code has been coded almost entirely manually, I was wondering If I could not generate It directly from DirectX header files...

So for the last few days, I have been a bit working on this... I'm using boost::wave as the preprocessor library... and I have to admit that the C++ guy from boost lost their mind with templates... It's amazing how they did something simple so complex with templates... I wanted to use this under a C++/Cli managed .NET extension to ease my development in C#, but I end up with a template error at link stage... an incredible error with a line full of concatenated template, even freezing visual studio when I wanted to see the errors in the error list!

Template are really nice, when they are used not too intensively... but when everything is templatized in your code, It's becoming very hard to use fluently a library and It's sometimes impossible to understand the template error, when this error is more than 100 lines full of cascading template types!

Anyway, I was able to plug this boost::wave in a native dll, and calling it from a C# library... next step is to see how much I can get from DirectX header files to extract a form of IDL (Interface Definition Language). If I cannot get something relevant in the next week, I might postpone this task when I won't have anything more important to do! The good thing is for example for D3D11 headers, you can see that those files were auto-generated from a mysterious... d3d11.idl file...used internally at Microsoft (although It would have been easier to get directly this file!)... so It means that the whole header is quite easy to parse, as the syntax is quite systematic.

Ok, this is probably not linked to intros... or probably only for 64k.... and I'm not sure I will be able to finish it (much like rmasm)... And this kind of work is keeping me away from directly working with DirectX, experimenting rendering techniques and so on... Well, I have to admit also that I have been more attracted for the past few years to do some tools to enhance coding productivity (not necessary only mine)... I don't like to do too much things manually.... so everytime there is an opportunity to automatize a process, I can't refrain me to make it automatic! :D

Following my bad appetite for tools, I need to make some update to AsmHighlighter and NShader, to add some missing keywords, patch a bug, support for new VS2010 version... whatever... When you release this kind of open source project, well, you have to maintain them, even if you don't use them too much... because other people are using them, and are asking for improvements... that's the other side of the picture...

So because I have to maintain those 2 projects, and they are in fact sharing logically more than 95% of the same code, I have decided to merge them into a single one... that will be available soon under codeplex as well. That will be easier to maintain, ending with only one project to update.


The main features people are asking is to be able to add some keywords easily and to map file extensions to the syntax highlighting system... So I'm going to generalize the design of the two project to make them more configurable... hopefully, this will cover the main features request...

An application for Windows Phone 7... meh?

Yep... I have to admit that I'm really excited by the upcoming Windows Phone 7 metro interface... I'm quite fed up with my iPhone look and feel... and because the development environment is so easy with C#, I have decided to code an application for it. I'm starting with a chromatic tuner for guitar/piano/violins...etc. and it's working quite well, even if I was able to test it only under the emulator. While developing this application, I have learned some cool things about pitch detection algorithm and so on...

I hope to finish the application around september, and to be able to test it with a real hardware when WP7 will be offcialy launched... and before puting this application on the windows marketplace.

If this is working well, I would study to develop other applications, like porting the softsynth I did in C# to this platform... We will see... and definitely, this last part is completely unrelated to democoding!

Well, I have to prioritize my work for the next months:
I still have also an article to write about ergon's making of, not much to say about it, but It could be interesting to write down on a paper those things....

I need also to work on some new directX effects... I have played a bit with hardware instantiating, compute shaders (with a raymarching with global illumination for a 4k procedural compo that didn't make it to BP2010, because the results were not enough impressive, and too slow to calculate...)... I would really want to explore more about SSAO things with plain polygons... but I didn't take time for that... so yep, practicing more graphics coding should be on my top list... instead of all those time consuming and - sometimes useful - tools!